Looking for Brazil in Chelsea

This month, Chelsea is ripe with Brazilian art!

At Tanya Bonakdar Gallery, Ricardo Basbaum, Carlos Contente, Laura Lima, Maria Nepomuceno, and Thiago Rocha Pitta, five artists from A Gentil Carioca gallery in Rio de Janeiro (which I had the pleasure to visit and wrote about here) are part of a terrific group show. 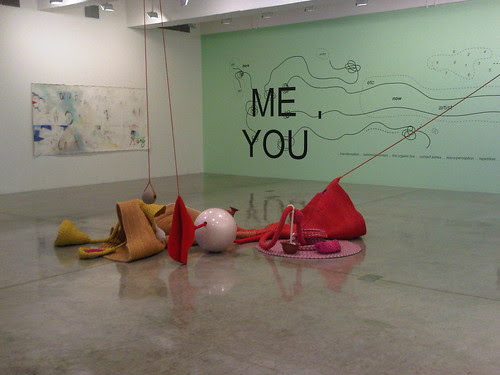 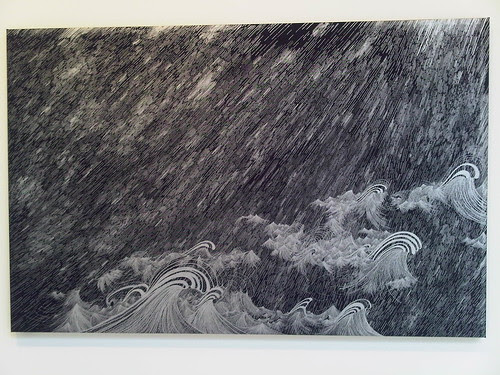 Since last August, P.S. 11 has been home to a public mural by Os Gêmeos. 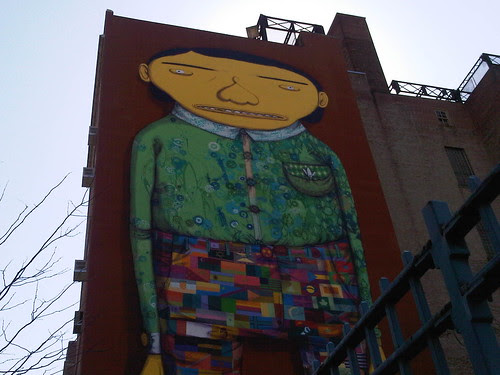 And 1500 Gallery, a relative newcomer to the neighborhood, specializes in Brazilian photography. Vale a visita! 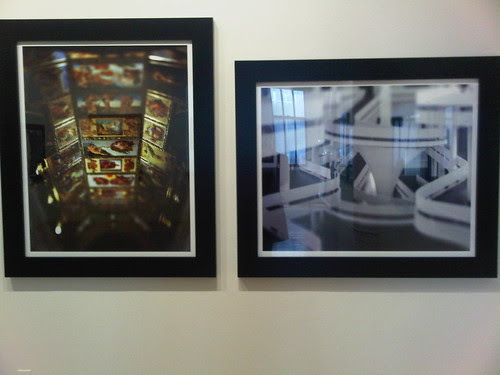 Posted by Jeffrey W. Bussmann at 8:53 PM No comments:

Unpacking the art of Rubens Ghenov 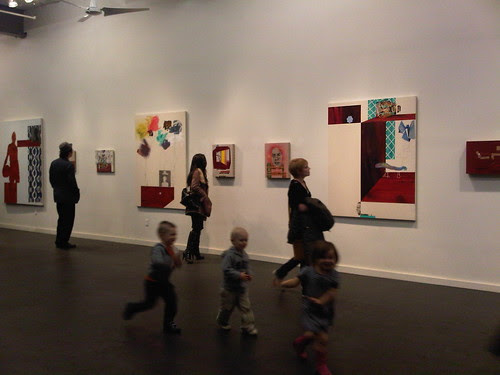 By chance, scrolling through the March First Friday listings, I cheerfully spied a rare sight: a Brazilian artist showing in a Philadelphia gallery. Rubens Ghenov was to be exhibiting at Artspace Liberti, housed in 2424 Studios. I was unfamiliar with Ghenov and his work, so the night before the opening I read up on him as much as possible with internet research. Born in São Paulo, Ghenov has lived in the United States for over twenty years. This is significant because it is enough time to have become fully assimilated as an American, though his work retains a primarily Brazilian identity. 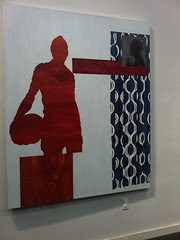 The exhibition, ie: Brazilein Chaekkorias, rotted one note, on view through April 24, comprises nine paintings and an audio component. The elaborate (and entirely mythological) historical narrative that informs the selected works, providing the conceptual backbone of the show, begs explanation. Ghenov relies on a triangle of cleverly contrived characters who are vaguely reminiscent of actual people: Ignácio Bira Puera, Norah Lheo, and Milton Jaula (Gaiolinha). Ignácio Bira Puera was the author of a forgotten volume called O Centimetro Fantasma (The Ghostly Centimeter), a chapter of which Ghenov cites as a direct influence on the paintings. Norah Lheo translated the text to English, providing both the artist and Milton Jaula with a copy of the book. Jaula, whose sample-heavy music was looped at the opening (the track can be streamed here), was also influenced by Bira Puera’s writing.

What does all of this mean? Ignácio Bira Puera seems to be a nod to Ibirapuera Park in São Paulo and a reference to Ghenov’s Paulistano childhood. The name Ibirapuera has been preserved from the Amerindian Tupi-Guarani language word for “rotten wood” (more on the significance of trees and timber later). He resembles some of the Modernist thinkers in Brazil during the first half of the twentieth century. Norah Lheo undoubtedly refers to Nara Leão, Bossa Nova turned Tropicália chanteuse. Milton Jaula is a play on the name of composer John Cage (full name: John Milton Cage, Jr.; “Jaula” translates to “cage” and the nickname Gaiolinha is a diminutive form for the word “seagull”). Jaula appears in one way to be an alter ego for Ghenov. And, although I’m speculating, he also bears some resemblance to Rogério Duprat, the man who pioneered the sound of the Tropicália movement’s most iconic songs. Taken altogether, this fascinating mélange of Brazilian cultural allusions sets up the parameters of a parallel universe which become Genov’s playground.

The title of the exhibition cites chaekkori, a Korean term for the depiction of items like books, brushes, or artwork, which denote erudition. Ghenov’s paintings contain similar elements, albeit ones he has extrapolated from Brazilian culture and then tweaked in some way. All but one of the works contains a deep crimson woodgrain motif of Pau-Brasil (known in English as “Brazilwood”), an emblematic tree that today is ripe with national connotation, and the history of which as an export product was essential to the colonial development of Brazil. Ghenov spoke to me about the wood acting like shelves within the picture plane, on which he propped other things. 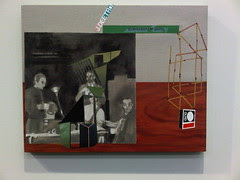 Within the paintings, he turns popular culture on its head, remixing it in a way similar to the accompanying sound collage that plucks from Bossa Nova, Tropicália, and MPB. Adding to the complexity, Ghenov overlays references to “high culture”. In Brazil, as well as much of Latin America, there has traditionally been less of a preoccupation with distinctly segregating high art from popular art. Nineteenth century Emperor Dom Pedro I is styled as Chico Buarque de Hollanda on the cover of his third album. A grid that calls to mind Hélio Oiticica’s Constructivist-period Metaesquema paintings maps the face of Gal Costa—both of them key players in Tropicália. 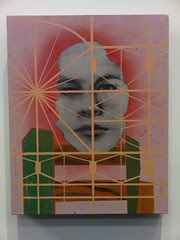 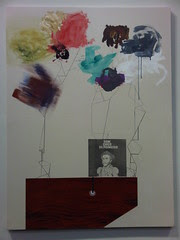 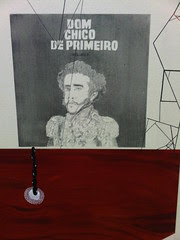 And in the remarkable Astronauta da Saudade, the final painting of the installation, he ties together five hundred years of Brazilian history. The astronaut is held aloft on pillars of Brazilian chaekkori and shelves of Pau-Brasil, while simultaneously being removed them as though they are on Earth, far below his space orbit. Saudade, the memory and the longing, is what remains for him. 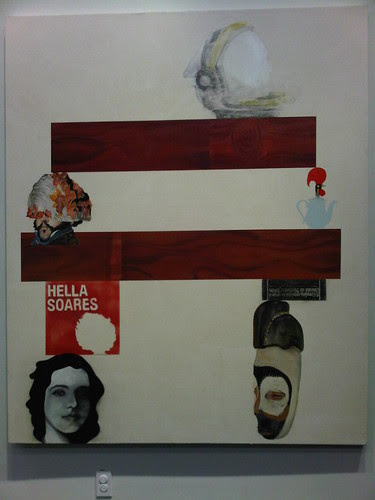