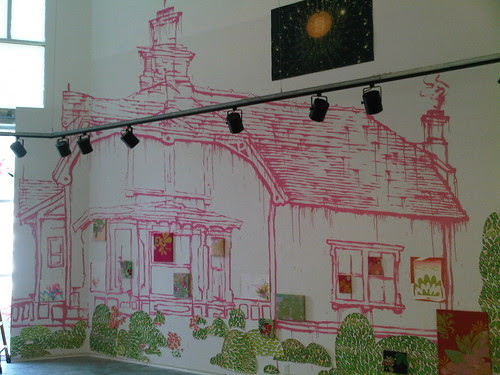 On Friday, I stopped by Leonard Pearlstein Gallery at Drexel University to meet with Candy Depew. She and her apprentices were finishing up the installation of Putting-Out! Practices in Cottage Industry and Urban Guilding, organized for the gallery by Filiz O’Brien, a friend and Arts Administration classmate of mine. A brief history lesson was in order, as Candy recounted to me the genesis of cottage industry and the “putting-out” system, an early form of entrepreneurship run by women and children from the home, that was influential laying groundwork for the Industrial Revolution. Although industry assimilated and overtook many types of cottage industry, it has never really gone away. Candy astutely pointed to Etsy as all the evidence one needs to see how robust “putting-out” remains today. She is heavily invested in screen printing, both as personal practice and as a teacher, and she sees screen printing as one of the main avenues of today’s cottage industry. In this way, she passes on a skill, whereby others can initiate and sustain their own creative commerce. 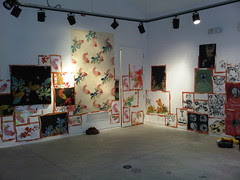 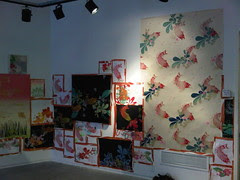 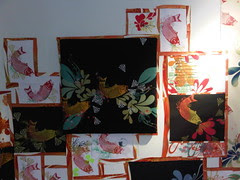 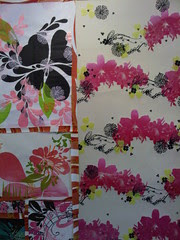 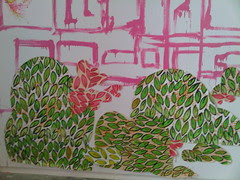 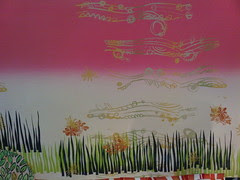 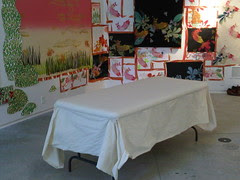 The focal point of the installation is a loosely-rendered wall painting of an actual cottage; when I arrived, apprentice Emilie Fosnocht was giving it a final touch up. Examples of Candy’s work, primarily screen printed items, radiate outward from the cottage, around the entire gallery. She calls her method of applying a decorative veneer to all possible surfaces “candy-coating”—also the title of her website. In the current show, the collected imagery represents something of a kitchen-sink approach, a tableau of the various iconographies that recur in her work. She explained to me the meaning behind some of the symbols: diamonds, because of their elemental composition, correlate to humans and all other forms of carbon-based life; koi fish, when appearing in clusters of seven, bring luck; and the ghoulish faces date to her time in New Orleans, when Anne Rice’s Interview With The Vampire was being filmed on location and she would see costumed actors roving the streets at 2 a.m. 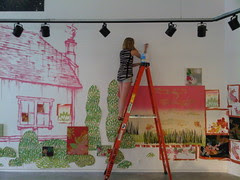 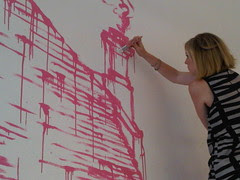 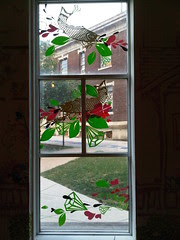 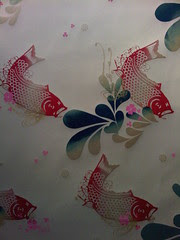 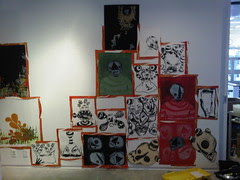 Putting-Out! Practices in Cottage Industry and Urban Guilding opens today, August 2, and runs through September 10. Candy will be running a screen printing demonstration at the opening reception on Wednesday, August 4 at 6:30 p.m.
Posted by Jeffrey W. Bussmann at 10:25 PM